By 1671, the year Jeanne arrived in Quebec, settlers were beginning to clear land in New France, under an arrangement of land grants, based on the French feudal system as modified by early French settlers in Quebec. The first grants were in and around Quebec City, westward toward Trois Rivieres and Montreal, eastward along the north shore of the St. Lawrence around the villages of Chateau Richer and L’Ange Gardien, and on Ile d’Orleans, the large island just east of Quebec City. Since the land along the southern shore of the St. Lawrence east of Quebec City remained heavily forested, Jean Talon as Intendant would begin to make many new land grants there during the next year (1672) to ensure the colony continued to expand.

The strategy for colonizing New France involved granting large blocks of land, or seigneuries, to individuals who would agree to settle the land. At least in the beginning, the recipients of these grants, seigneurs, or “lords,” were primarily members of the French nobility, the church, or soldiers who agreed to remain in New France after their service was ended.

In order to ensure somewhat equal access to the St. Lawrence and a certain amount of consistency in their shape, these seigneuries, were usually granted along the river in long narrow rectangles. The result was a pattern of a large number of these rectangles along both shores of the St. Lawrence River. Within a seigneurial grant, land was arranged in rows, or “rangs.” The first rang included land directly on the riverbank and was to be used for the first grants to settlers. The remaining rangs were left for subsequent grants and further development of a seigneurie.

Typically, in the first rang the seigneur would stake out a personal domain where the manor would be built. The size of this domain varied from one seigneurie to another. In addition, the seigneur would usually reserve some land not far from the manor for a church and presbytery and for the support of the priest. Many seigneuries also set aside common land for grazing animals.

As a condition of the grants, seigneurs were required to clear the land and turn forests into farms. To accomplish this goal, the seigneurs were expected to bring over settlers, with 36 month contracts. In exchange for their voyage to New France and the promise of a grant of land at the successful completion of their contracts, these settlers, known as “36-monthers,” would clear the seigneur’s land and help build his home. At the conclusion of their contracts, the colonists, or habitants as they were known then, would receive their own land with the agreement that they would then clear it for further development. Within the seigneur’s grant, land grants to settlers repeated the rectangular pattern of the seigneur’s grant. They were long and narrow and usually measured 3 arpents wide by 30 arpents deep in an attempt to give as many settlers as possible frontage on the river. These patterns are still visible on the landscape around Quebec. 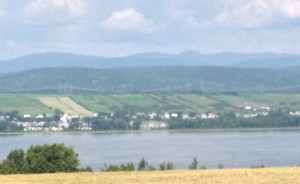 Seigneurs were expected to fulfill certain other responsibilities to the King and to their tenants.   As soon as a Seigneur took possession of his grant, he had to perform an act of homage before the King’s representative, the Intendant, in the governor’s chateau in Quebec City to affirm his commitment to carry out his duties. He promised to provide an inventory listing tenants and rents due upon the transfer of the land or upon request from the Intendant. Any oak trees on the land and minerals in the soil remained property of the State. There were also taxes due to the State upon the subsequent sale (but not inheritance) of the seigneurie, in an attempt to discourage trading in land grants.

In addition, seigneurs had responsibilities to their tenants. They were expected to build a manor house where the habitants would pay their taxes. They were also expected to provide land for and contribute to the upkeep of a church, construct and maintain a flour mill for settlers, and participate in the building of roads. And since they had the right to administer justice, they also had to assume the expenses of a seigneurial court, although most major cases were reserved for the state.

Seigneurs were granted a pew in a position of honor in the church, usually facing the pulpit, [photo] and they had the right to be buried under the seigneurial pew. They could carry a sword and had a title of “knight” or ecuyer. And seigneuries, along with church parishes, served as units of local government, defense, and community life.

After habitants received their grants of land, they owed the seigneurs taxes that included a small amount of money, several live capons to be brought on St. Martin’s Day (November 11) to the Lord’s manor house, and a specified number of days of annual service. They committed to fulfill certain responsibilities, such as building roads, supporting the church, and having their wheat ground at the seigneurial mill when it was built. They were also expected to pay the seigneur a percentage of the sale of any land to anyone other than direct family. They could hunt and fish, although they owed the seigneur a designated portion of their catch. And they were expected to plant a Maypole (a fir tree stripped of its branches except at the top) on the seigneur’s property every year on May 1 – as a tribute to the seigneur.

Relations between the habitants and seigneurs were said — by some historians at least —  to be closer and friendlier than in France at the time since both were working against an unsettled wilderness. The houses of the seigneurs were usually larger, possibly made of stone, and more comfortable than those of the habitants, but they were not the castles still visible in France. Habitants eventually had land of their own, had more freedom, and paid fewer taxes than their counterparts in France. In the 17th century and into the early 18th, their land was not devastated by war.

For seigneurs, it was a different story. Seigneurs still had privileges and commanded respect, but apparently they were less well off than their peers in France, at least financially. According to research conducted by Richard Colebrook Harris in his book The Seigneurial System in Early Canada, most seigneuries were rarely very profitable, despite the income from taxes and other revenues and despite the absence of financial burdens that their French counterparts had to face. The system seems to have been created and maintained as a means toward colonization, as opposed to a path to wealth and power for seigneurs.

This system of land settlement by seigneurs and habitants was not played out uniformly across 17th century Quebec. Some seigneurs did apparently take their responsibilities seriously, by maintaining residences on their grants, working with their habitants to clear and develop the land, bringing in new settlers, and thus fulfilling their promise to the King. Others, however, remained in Quebec City or Montreal, preferring to enjoy a more “courtly” life there. They failed to bring in colonists to clear the land, despite threats from the King that their seigneuries might be confiscated if they weren’t developed.

Similarly, not all colonists chose to settle down to clear and then eventually develop their own land. Clearing land and farming it were difficult tasks and often required habitants to continue working a trade to bring in income to fund purchases of materials and tools for their farms. Some newcomers chose alternative life styles, electing to trap, for example, a life of great freedom but not without several lethal threats from the demands of the work, frigid winters, wild animals, and discontented native population. Others chose to rent already cleared land to get a jump start on settlement. Others chose to trade in grants, buying and selling land and leasing it out again. And still others chose to stay in Quebec City or Montreal and become merchants or artisans. Today they might all, seigneurs and habitants included, be called “entrepreneurs!”

One of the displays in the Museum of Civilization in Quebec City describes these settlers, in my translation: “All sorts of people – high-minded and low-minded, capable or not, came to Quebec. Some settled and some moved on. Not all were heroes, not all were rogues.” I would add, “the deeper the research, the more profound the realization that they were, for the most part, men and women, ordinary enough but certainly courageous enough to make new lives for themselves and their families.”