Thanks to a great deal of inspiration from my ancestor Jeanne Chevalier and to the wonderful support of so many friends, I am happy to announce that the “sequel” to Jeanne’s history is now available at amazon.com,  amazon.ca, and amazon.fr, in English only, at the moment. 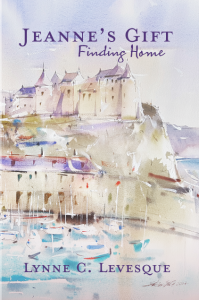 The 2018 Fête de la Nouvelle France was another wonderful celebration of the history of Quebec.  Despite the heat and the oppressive humidity, costumed women commemorated the role of the Filles du Roi in founding  END_OF_DOCUMENT_TOKEN_TO_BE_REPLACED

While I have spent the last several years researching the history of Jeanne Marguerite Chevalier, my eighth great grandmother, there is at least one other Jeanne whose story should be included in this blog.  That’s Jeanne Savonnet. The life of this second Jeanne is more well-known than the life of Jeanne Marguerite, but there are several parallels between the two.  END_OF_DOCUMENT_TOKEN_TO_BE_REPLACED

END_OF_DOCUMENT_TOKEN_TO_BE_REPLACED

In June, 1671, 28-year-old Jeanne Marguerite Chevalier boarded a ship in Dieppe harbor.  She was leaving France forever and was headed for Quebec.  Although single and orphaned, she was not alone on the ship since there were one hundred other women also bound for Quebec that year. In fact, over the course of ten years beginning in 1663, 770 women would have left France, most of them, like Jeanne, never to return.  END_OF_DOCUMENT_TOKEN_TO_BE_REPLACED

Three weeks after four-year-old Louis XIV was crowned King of France and 35 years after the founding of Quebec, Jeanne Marguerite Chevalier was baptized on June 8, 1643 in the small cathedral town of Coutances, 330 kilometers west of Paris and the new king and 75 kilometers northeast of Mont St. Michel. Other than a one-line entry registering her baptism and listing Guillemette LeBreton as her godmother, I know little else about Jeanne’s life in France. The actual facts about Jeanne’s life are not resumed until her name is found as a Fille du Roi on ships’ rosters that left Dieppe in June, 1671. And since the rosters are still being researched, there is nothing really official about Jeanne until her name appeared on a marriage contract in Quebec City on October 11, 1671.  END_OF_DOCUMENT_TOKEN_TO_BE_REPLACED

Seventeenth century New France needed women. The colony was not growing. Although Montreal had been established a year before Jeanne was born, the French in what would become Quebec still numbered less than 3000 inhabitants in 1663. Those men who ventured to New France were not electing to settle down there. While the climate was certainly a factor, the major reason, at least according to Louis XIV and his chief minister Colbert, was the lack of women. Louis and his ministers decided that it was time to do something about the situation, to turn exploration of New France into settlement.   END_OF_DOCUMENT_TOKEN_TO_BE_REPLACED

At news of a ship’s arrival with a contingent of Filles du Roi, men were said to hurry to greet the passengers. Many were probably eager for female companionship. Orders from the Intendant requiring young men to find a bride soon after a ship’s arrival or lose their hunting and fishing privileges most likely spurred them on as well. And perhaps the King’s gifts upon marriage were also seen as helping to jumpstart a farm. For whatever reason, the arrival of these women must have been a joy, at least for those seeking to stay in the colony, maintain their freedom and a brighter future than in France, and still have a family.

How must these women have felt when they walked off the ship into the throngs of men to their new, though temporary, home in Quebec City, Trois Rivieres, or Montreal? Did they think, “What have I done?” or were they both excited and scared about the adventure ahead?  END_OF_DOCUMENT_TOKEN_TO_BE_REPLACED

I frequently am asked why my ancestor decided to leave France and come to the new colony. Trying to understand the reasons why she chose as she did involves a great deal of speculation because the Filles du Roi left few records or diaries. For most, it must have been a voluntary decision, although it’s possible there was some strong encouragement by guardians, parents or officials at the charity hospitals or parish priests, or even recruiters. At a colloquium on the Filles du Roi in Quebec several years ago, famed historian Yves Landry proposed that, based on admittedly little evidence, many – particularly those in the charity houses in Paris — could have been coerced to join the program.  END_OF_DOCUMENT_TOKEN_TO_BE_REPLACED