In addition to providing as many details as possible about my ancestor, the posts will also include anecdotes about experiences encountered in my search for Jeanne’s story.  As Jeanne’s 8th great granddaughter, writing almost 300 years after her death, I am in the process of weaving together many historical bits and pieces of her life with archival research, live interviews and conversations in France, Quebec and the United States.  And of course, I’m having to use some creative hypothesizing and my intuition to fill in any gaps in information.  Jeanne’s is a story full of both facts and mysteries.  It’s a story of endings and new beginnings.  And it’s a story of much courage, stamina, will, and many choices.  Please read Suggested Table of Contents for some tips on how to read the posts.

I am continuing to write the sequel to my book on Jeanne – this one to include the stories of the remarkable people I met and extraordinary experiences I had during my search for Jeanne’s story.  It is taking a lot longer to write for several reasons, not the least of which are   END_OF_DOCUMENT_TOKEN_TO_BE_REPLACED

At the end of the book about the life of Jeanne that I published in November, 2016, I made two promises.  The first was to continue my research on her life and that of her three husbands in order to fill in the holes of information and to resolve the remaining mysteries.  The second, to tell the stories of the numerous extraordinary adventures   END_OF_DOCUMENT_TOKEN_TO_BE_REPLACED

Over the past three years, whenever I have given a presentation about Jeanne Chevalier and her family, I have usually provided a listing of her descendants who are famous enough to be known in the USA, Quebec and France:  Rene Lévesque, Celine Dion, and Jack Kerouac.  Only recently have I started to include the name of Lieutenant Jean-Jacques Lévesque.   END_OF_DOCUMENT_TOKEN_TO_BE_REPLACED

The 2018 Fête de la Nouvelle France was another wonderful celebration of the history of Quebec.  Despite the heat and the oppressive humidity, costumed women commemorated the role of the Filles du Roi in founding  END_OF_DOCUMENT_TOKEN_TO_BE_REPLACED

While I have spent the last several years researching the history of Jeanne Marguerite Chevalier, my eighth great grandmother, there is at least one other Jeanne whose story should be included in this blog.  That’s Jeanne Savonnet. The life of this second Jeanne is more well-known than the life of Jeanne Marguerite, but there are several parallels between the two.  END_OF_DOCUMENT_TOKEN_TO_BE_REPLACED

END_OF_DOCUMENT_TOKEN_TO_BE_REPLACED

In 2002, 5 years before the release of the movie “The Bucket List,” I composed a list of things I wanted to do before leaving this world.  Near the top of the list were:  Write a book about my ancestor Jeanne Chevalier, Fille du Roi; learn French; and live for at least six months in France.  Well, 15 years later,  END_OF_DOCUMENT_TOKEN_TO_BE_REPLACED

The first time I heard the name of Jeanne Marguerite Chevalier was over twenty years ago.  A book about her life started to take shape in my head roughly eight years later, in 2002.  Preliminary research followed.  The drive to learn more about Jeanne and write her story, however, only  became an obsession one cold February day in 2011 when I stood in St. Nicolas church in Coutances where she was baptized on June 8, 1643.   And now, finally, I am happy to announce the publication of this first version of the history of her life, just one day before the 300th anniversary of her death.

Jeanne Chevalier, Fille du Roi: Her Story is now available at http://www.harvard.com for purchase in the United States and Canada. 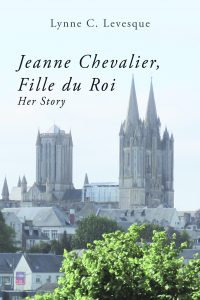 END_OF_DOCUMENT_TOKEN_TO_BE_REPLACED

After months of silence, I am back writing for my blog and along the way, have run into some problems.  I would like to apologize for any strange announcements that you might have received from my blog.  I hope that we have resolved them and there won’t be any new “glitches.”

Silence has not meant absence of progress, rest assured.    END_OF_DOCUMENT_TOKEN_TO_BE_REPLACED